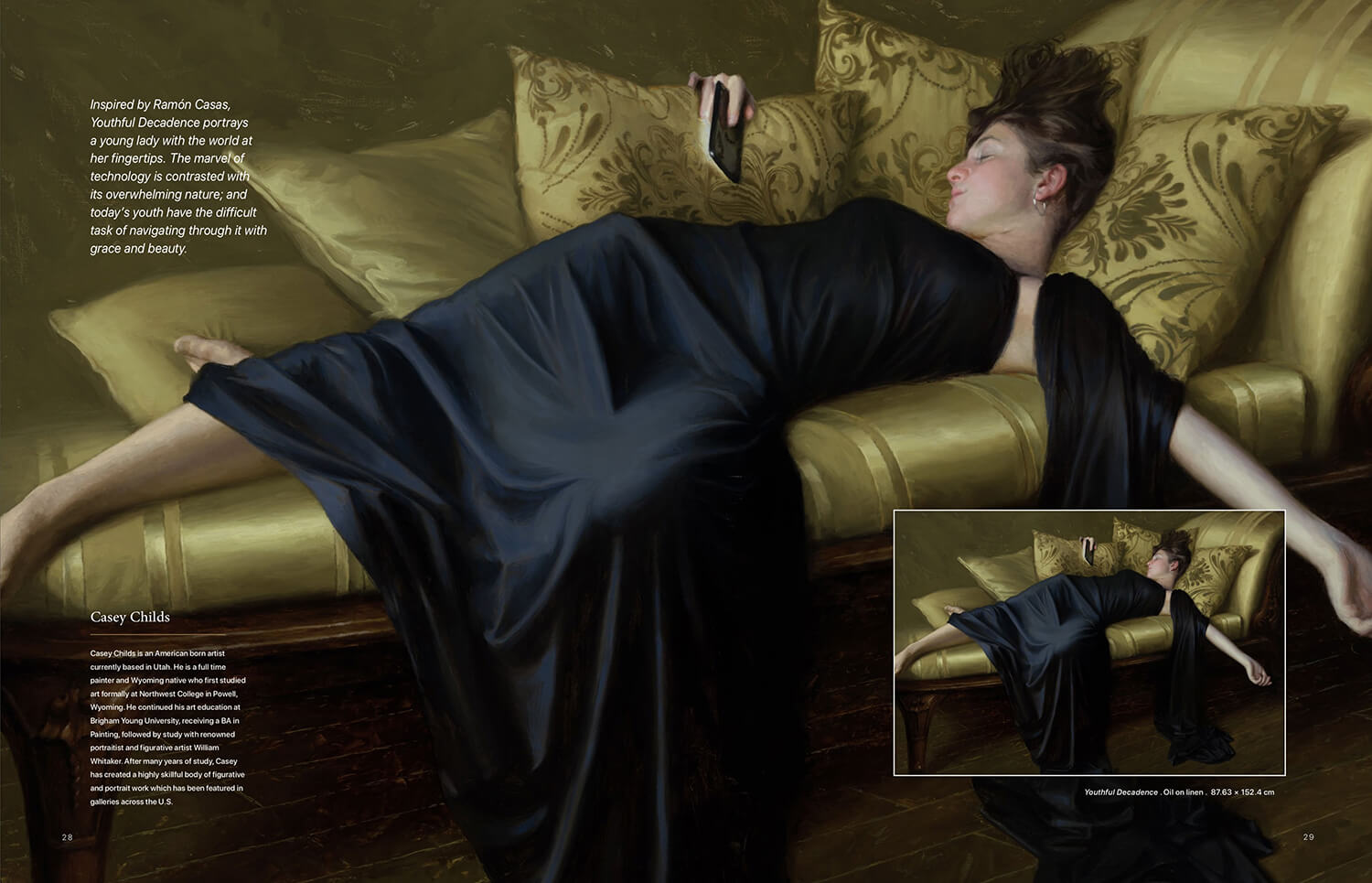 You’ve shed a few layers of clothing, rolled up your trouser legs and your skin is turning redder by the minute. Summer has arrived, and it’s glorious. As warm sunlight gives the world a beautiful glow and crowds flock to the beach, mountain… we bring you a curated selection of paintings that capture the essence of the season.

Is September, we at the squad sure needed some inspiration and with the sweltering heat of summer upon us we did some research and pulled up some of the best paintings of what summer. Along with tons of great upcoming content, we thought we’d share a little summer inspiration with the Top Eleven Summer Paintings: 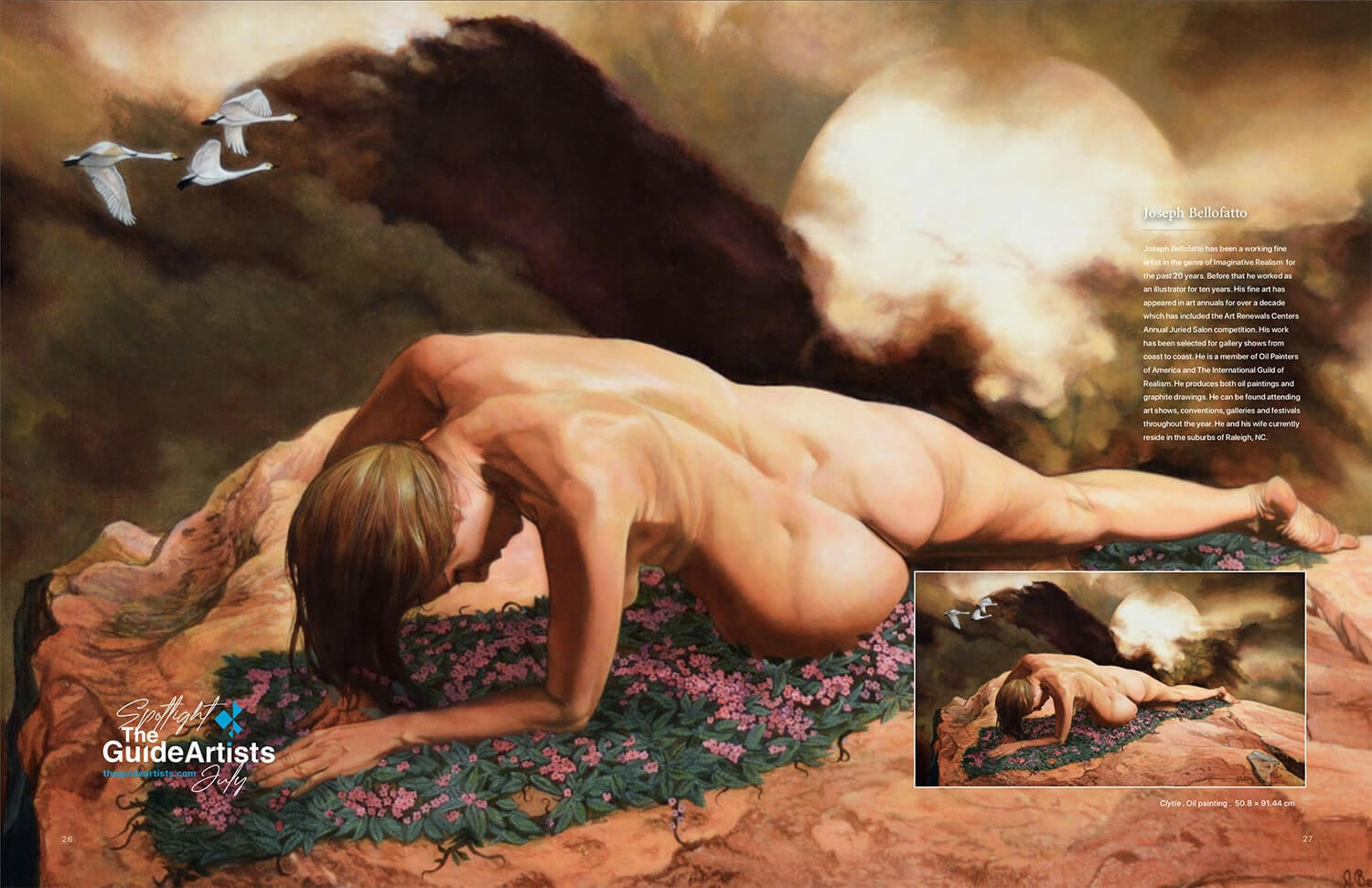 Joseph Bellofatto has been a working fine artist in the genre of Imaginative Realism for the past 20 years. Before that he worked as an illustrator for ten years. His fine art has appeared in art annuals for over a decade which has included the Art Renewals Centers Annual Juried Salon competition. His work has been selected for gallery shows from coast to coast. He is a member of Oil Painters of America and The International Guild of Realism. He produces both oil paintings and graphite drawings. He can be found attending art shows, conventions, galleries and festivals throughout the year. He and his wife currently reside in the suburbs of Raleigh, NC.

Youthful Decadence . Oil on linen . 87.63 × 152.4 cm | Inspired by Ramón Casas, Youthful Decadence portrays a young lady with the world at her fingertips. The marvel of technology is contrasted with its overwhelming nature; and today’s youth have the difficult task of navigating through it with grace and beauty.

Casey Childs is an American born artist currently based in Utah. He is a full time painter and Wyoming native who first studied art formally at Northwest College in Powell, Wyoming. He continued his art education at Brigham Young University, receiving a BA in Painting, followed by study with renowned portraitist and figurative artist William Whitaker. After many years of study, Casey has created a highly skillful body of figurative and portrait work which has been featured in galleries across the U.S. 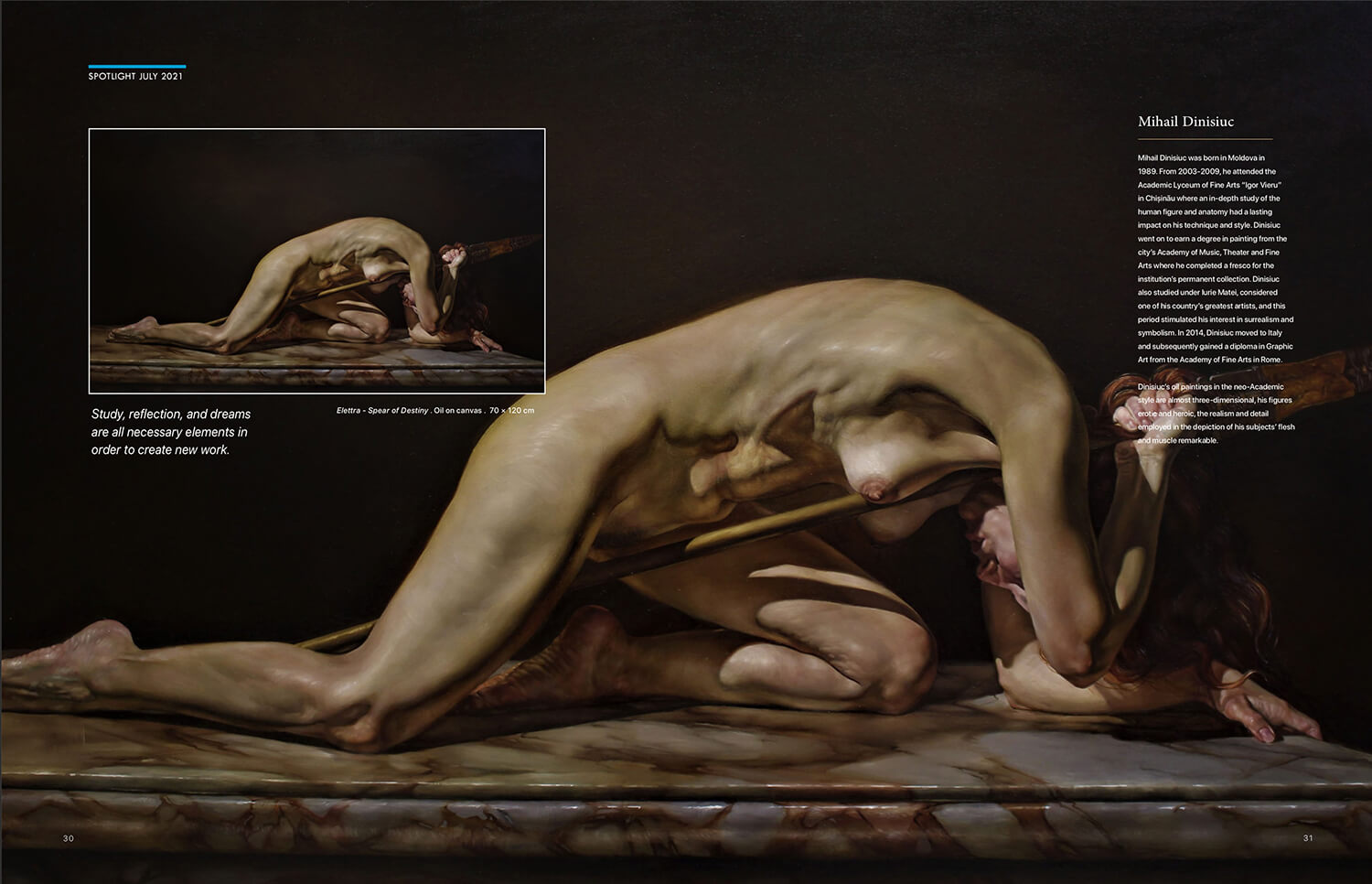 Mihail Dinisiuc was born in Moldova in 1989. From 2003-2009, he attended the Academic Lyceum of Fine Arts “Igor Vieru” in Chișinău where an in-depth study of the human figure and anatomy had a lasting impact on his technique and style. Dinisiuc went on to earn a degree in painting from the city’s Academy of Music, Theater and Fine Arts where he completed a fresco for the institution’s permanent collection. Dinisiuc also studied under Iurie Matei, considered one of his country’s greatest artists, and this period stimulated his interest in surrealism and symbolism. In 2014, Dinisiuc moved to Italy and subsequently gained a diploma in Graphic Art from the Academy of Fine Arts in Rome. 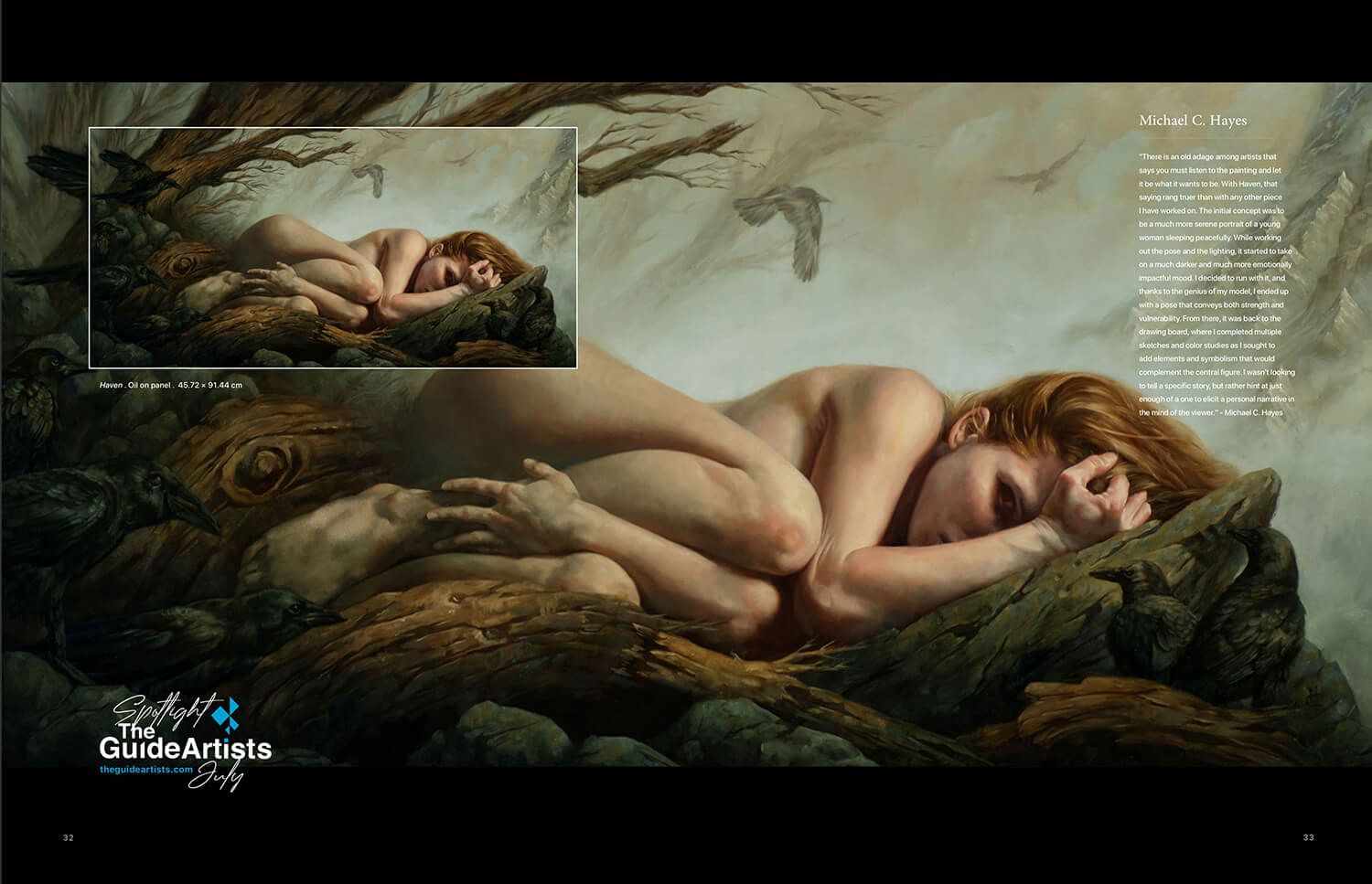 “There is an old adage among artists that says you must listen to the painting and let it be what it wants to be. With Haven, that saying rang truer than with any other piece I have worked on. The initial concept was to be a much more serene portrait of a young woman sleeping peacefully. While working out the pose and the lighting, it started to take on a much darker and much more emotionally impactful mood. I decided to run with it, and thanks to the genius of my model, I ended up with a pose that conveys both strength and vulnerability. From there, it was back to the drawing board, where I completed multiple sketches and color studies as I sought to add elements and symbolism that would complement the central figure. I wasn’t looking to tell a specific story, but rather hint at just enough of a one to elicit a personal narrative in the mind of the viewer.” – Michael C. Hayes 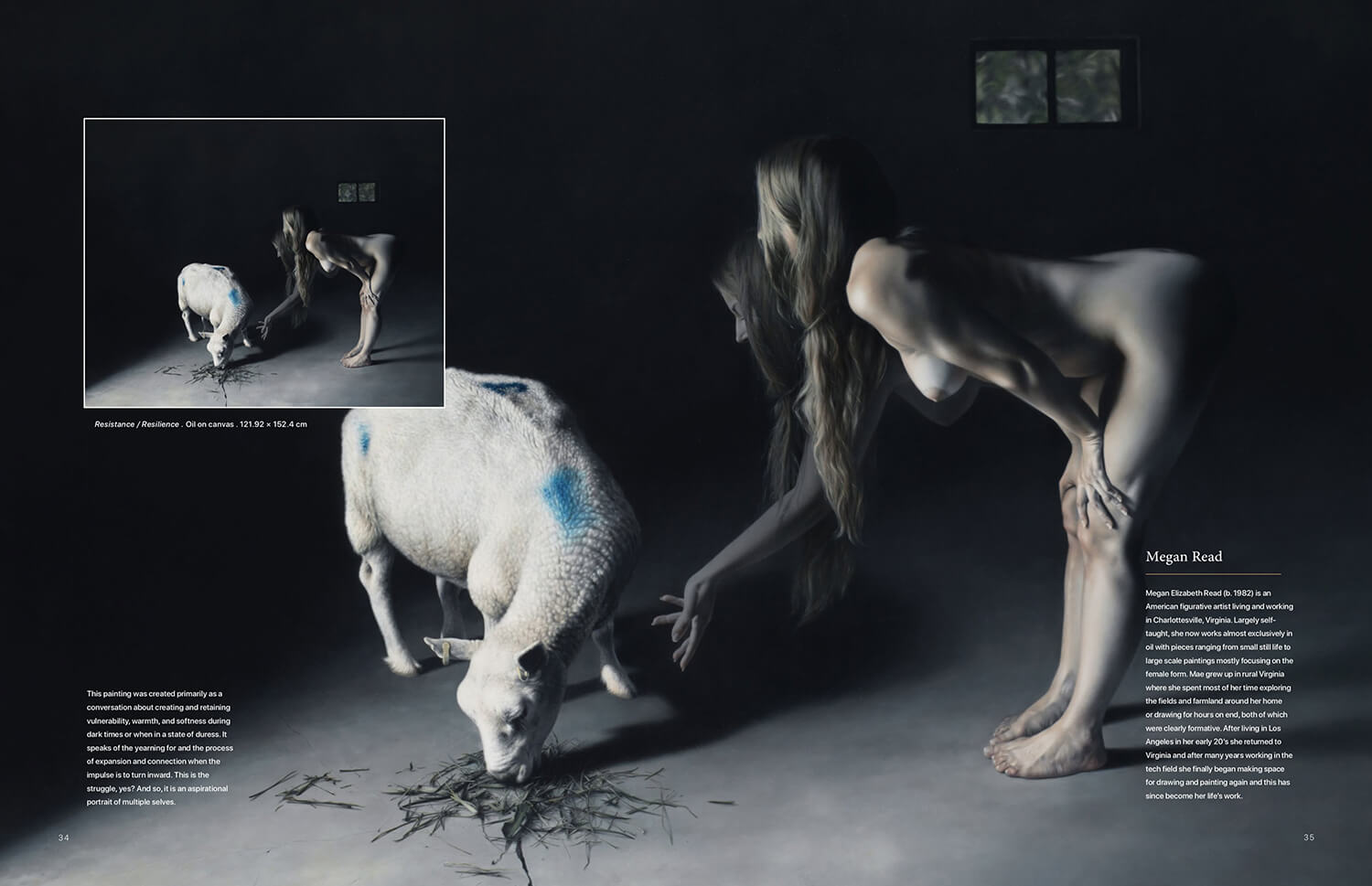 Resistance / Resilience . Oil on canvas . 121.92 × 152.4 cm | This painting was created primarily as a conversation about creating and retaining vulnerability, warmth, and softness during dark times or when in a state of duress. It speaks of the yearning for and the process of expansion and connection when the impulse is to turn inward. This is the struggle, yes? And so, it is an aspirational portrait of multiple selves.

Megan Elizabeth Read (b. 1982) is an American figurative artist living and working in Charlottesville, Virginia. Largely self- taught, she now works almost exclusively in oil with pieces ranging from small still life to large scale paintings mostly focusing on the female form. Mae grew up in rural Virginia where she spent most of her time exploring the fields and farmland around her home
or drawing for hours on end, both of which were clearly formative. After living in Los Angeles in her early 20’s she returned to Virginia and after many years working in the tech field she finally began making space for drawing and painting again and this has since become her life’s work. 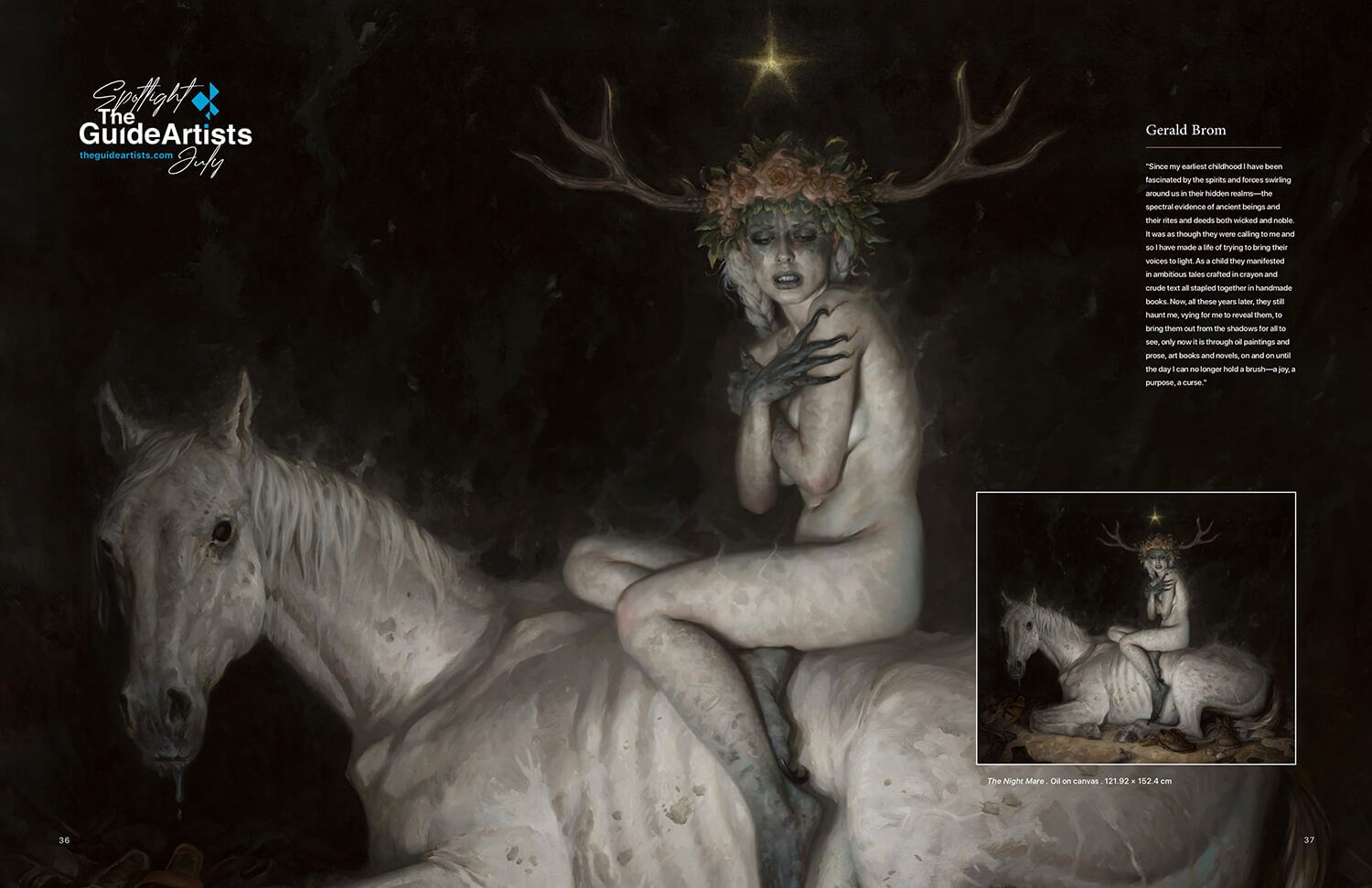 “Since my earliest childhood I have been fascinated by the spirits and forces swirling around us in their hidden realms—the spectral evidence of ancient beings and their rites and deeds both wicked and noble. It was as though they were calling to me and so I have made a life of trying to bring their voices to light. As a child they manifested in ambitious tales crafted in crayon and crude text all stapled together in handmade books. Now, all these years later, they still haunt me, vying for me to reveal them, to bring them out from the shadows for all to see, only now it is through oil paintings and prose, art books and novels, on and on until the day I can no longer hold a brush—a joy, a purpose, a curse.” 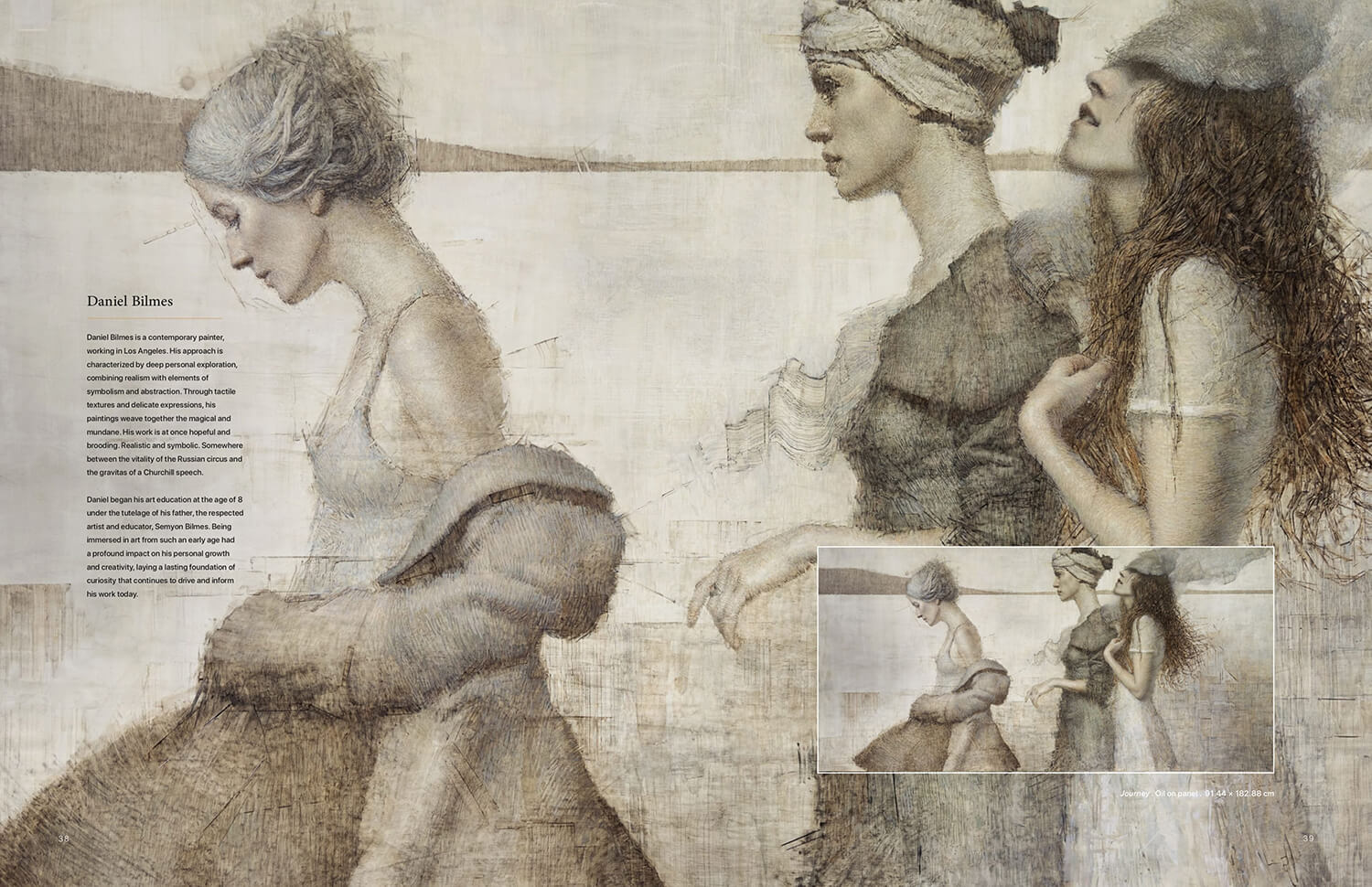 Daniel Bilmes is a contemporary painter, working in Los Angeles. His approach is characterized by deep personal exploration, combining realism with elements of symbolism and abstraction. Through tactile textures and delicate expressions, his paintings weave together the magical and mundane. His work is at once hopeful and brooding. Realistic and symbolic. Somewhere between the vitality of the Russian circus and the gravitas of a Churchill speech.

Daniel began his art education at the age of 8 under the tutelage of his father, the respected artist and educator, Semyon Bilmes. Being immersed in art from such an early age had a profound impact on his personal growth and creativity, laying a lasting foundation of curiosity that continues to drive and inform his work today.

Murder of Crows . Oil on panel . 45.72 × 60.96 cm | As an artist Kat seeks to explore the visual language as a representational form of communication. She considers her ongoing curiosity and studies as precursors to her development and growth as an artist and eventually seeks to make her paintings unfold like puzzles to the viewer, always hiding something new.

Kathiucia Dias, also known as ‘Kat’, was born in Brazil and at an early age moved to the U.S., east coast specifically, where she stayed through college. Sick of the snow, she migrated to the West coast, happy to park and call L.A. home for over a decade now. Professionally, Kat started off working as a painter (prototype and conceptual) for the entertainment industry until she decided to pursue a career in Fine Art. Since then, she has further pursued an education, modeled, taught at various schools, and has sold and worked with galleries in shows all over the country.

As an artist Kat seeks to unfold visual narratives with her work. Whether they be active or passive, her focus is the idea, or rather, the ‘read’ of the painting. Hopefully this provides the viewer with not only a stimulating visual experience, but also with substance as they search and discover their own meaning behind the composition and the various elements placed within it, like puzzle pieces falling together into one.

Sontga Margriata . Oil on canvas . 76 × 76 cm | Patrick Devonas studied and worked in the United states for 26 years. He returned to his country of birth ( Switzerland ) in 2012, where he continues to work in his painting and sculpting atelier which is located in a little town nestled in the alps ( Surava ). His interest is focused primarily on the human psyche as it relates to history and politics.

Patrick Devonas, painter and sculptor, (* 1965 in Lucerne) has taught painting and anatomical drawing at international universities. After a long stay in the USA, Patrick Devonas has been living in Surava in Graubünden again since 2011. His outstanding painting impresses, among other things, with the technique of the old masters, which has become rare today. For this reason, Devonas was commissioned by the Rhaetian Museum in 2017 to make a replication of the legendary portrait of the Grisons freedom hero Jürg Jenatsch from the 17th century. 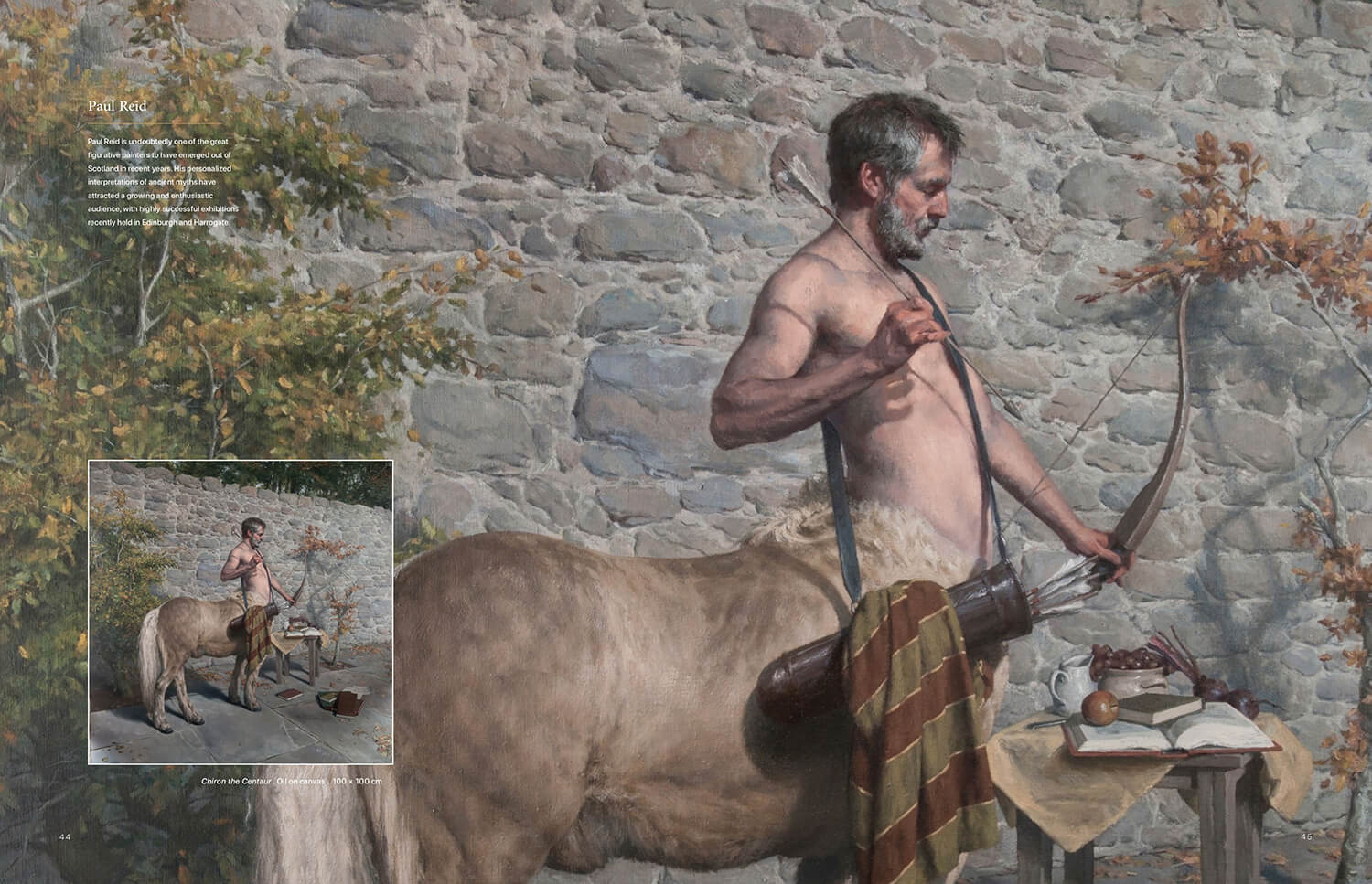 Paul Reid is undoubtedly one of the great figurative painters to have emerged out of Scotland in recent years. His personalized interpretations of ancient myths have attracted a growing and enthusiastic audience, with highly successful exhibitions recently held in Edinburgh and Harrogate. 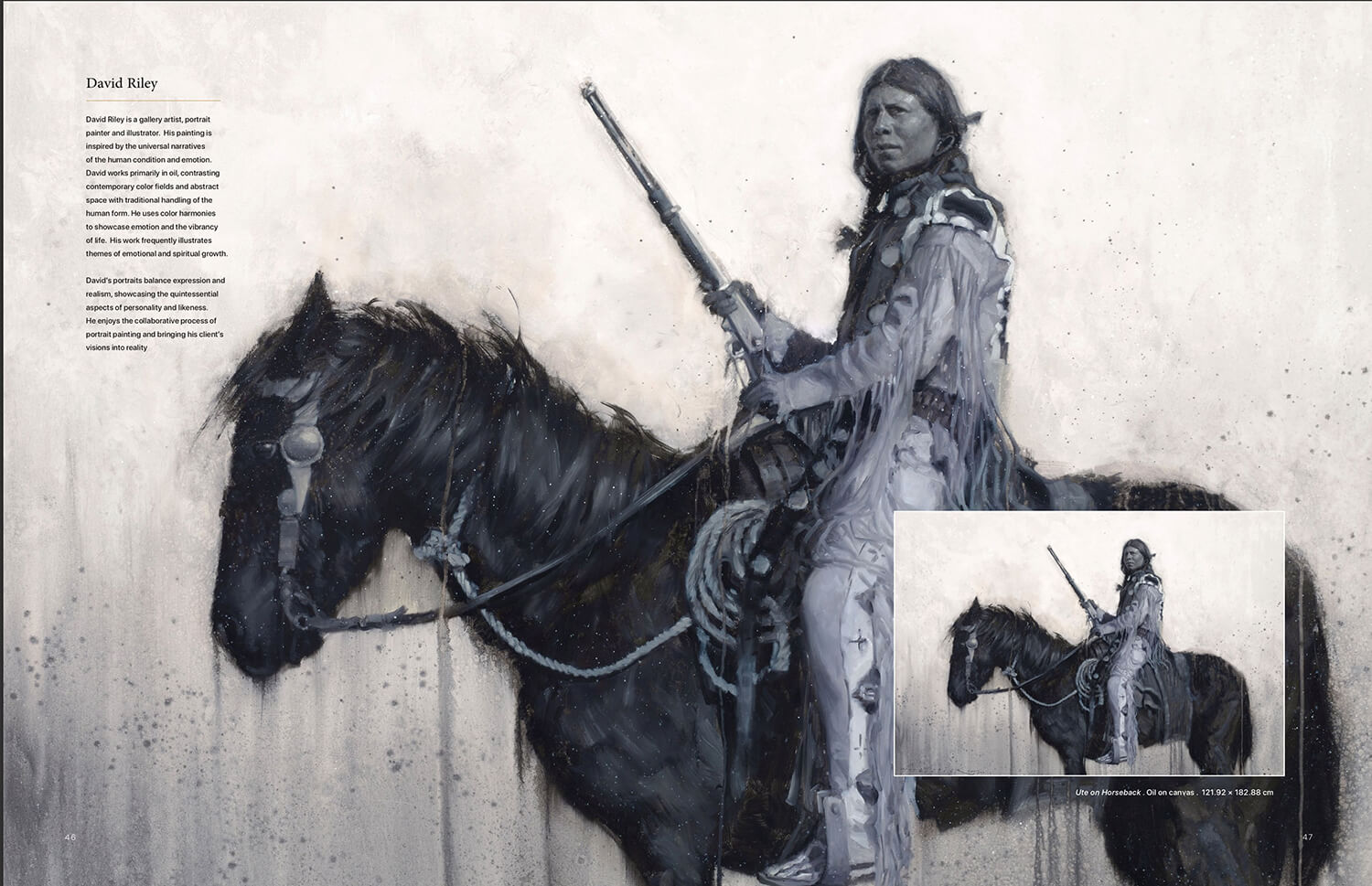 David Riley is a gallery artist, portrait painter and illustrator. His painting is inspired by the universal narratives of the human condition and emotion. David works primarily in oil, contrasting contemporary color fields and abstract space with traditional handling of the human form. He uses color harmonies to showcase emotion and the vibrancy of life. His work frequently illustrates themes of emotional and spiritual growth.

David’s portraits balance expression and realism, showcasing the quintessential aspects of personality and likeness. He enjoys the collaborative process of portrait painting and bringing his client’s visions into reality.

by The Guide Artists
6 C 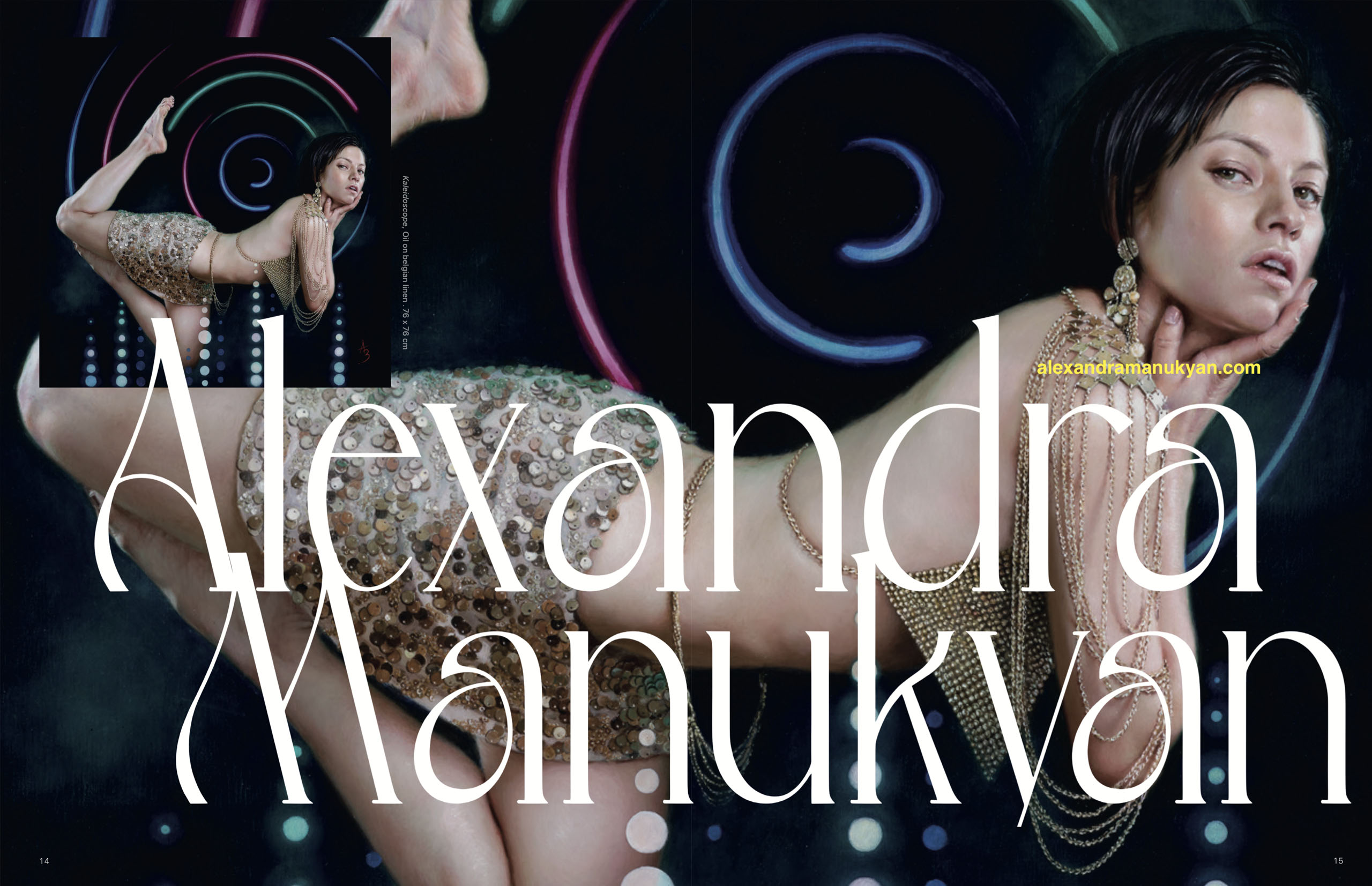